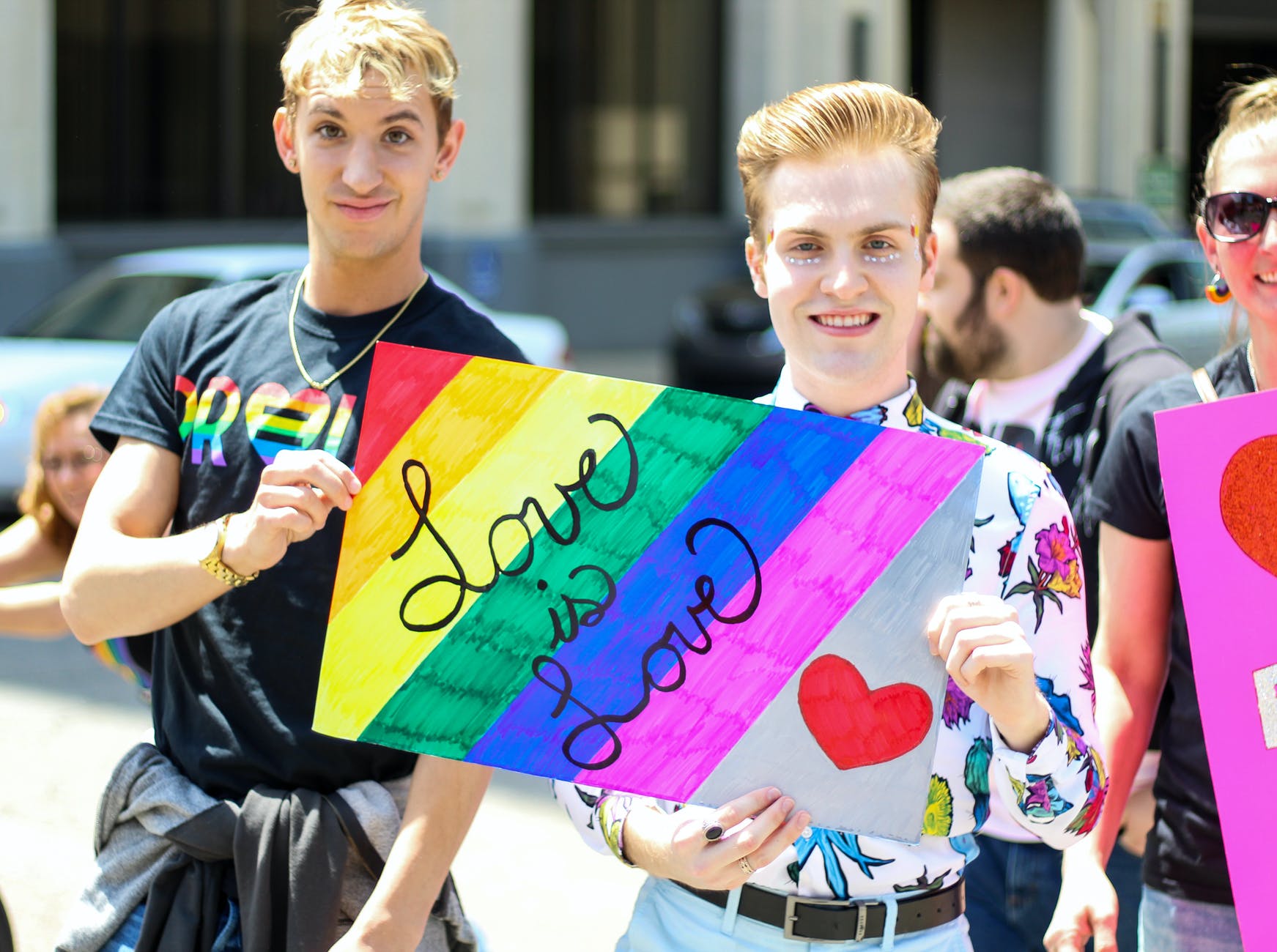 Near the beginning of James Baldwin’s 1956 novel “Giovanni’s Room,” the narrator, David, recalls the moment at which he became conscious of his homosexuality. He was a teenager, in bed with another boy — the bed itself a testament to “vileness” — and made what he calls a “decision” to live as a straight man.

It is one of the most stirring depictions in literature of a moment all too familiar to queer folks — an instance of self-recognition and denial. David, facing a “cavern in which I would be tortured till madness came,” concludes it would be harder to love men freely than to live a lie.

For David, the decision is less a conscious choice than an involuntary act of psychological contortion; his foremost victim is not one of the many people to whom he lies throughout the novel — his girlfriend, Hella; his lover, Giovanni — but himself. “People who believe that they are strong-willed and the masters of their destiny can only continue to believe this by becoming specialists in self-deception,” he confesses. “Their decisions are not really decisions at all … but elaborate systems of evasion, of illusion, designed to make themselves and the world appear to be what they and the world are not.”

There is a similar moment of reckoning in E. M. Forster’s “Maurice,” written four decades before “Giovanni’s Room” but published 15 years after, on account of Forster’s suppression of the book, and his own sexuality, until his death. Nevertheless, “determined that in fiction anyway two men should fall in love and remain in it,” as he wrote in an endnote to the novel in 1960, Forster endowed his protagonist with a courage he himself did not possess. So young Maurice, having fallen in love with a man in an Edwardian England not 20 years removed from Oscar Wilde’s gross indecency trials, sets out to live openly. “Lies are the natural food of boyhood, and he had eaten greedily,” Forster writes of Maurice, who pledges no longer to feign an attraction to women, recognizing honesty as his only chance for salvation.

For much of the 19th and 20th centuries, from Dorian Gray to Tom Ripley, the lie of the closet was the hinge upon which queer literature would pivot, reflecting what were then the often judicial or mortal costs of being openly gay. Insincerity, “merely a method by which we can multiply our personalities,” as Dorian Gray put it, was the mode of congress gay men had been taught to adopt for the sake of self-preservation; it manifested itself as a kind of characterological tradition, a means by which the psychological theater of the closet could be dramatized, from Dorian Gray’s rhetorical fabrications to Tom Ripley’s serialized guile.

For the most part, the closet now is not the potentially terminal fate it once was, but rather a layover in the long journey to the self, an enclosure from which truth emerges. And yet it has hardly been jettisoned as a metaphor for all kinds of concealment. In much recent queer fiction are modern, mostly openly gay characters for whom self-denial and even outright deception have become a way of life.

This is the guiding principle of Peter Kispert’s new story collection, “I Know You Know Who I Am,” in which gay men twist the truth by force of habit, often in pursuit of a masculine ideal that feels otherwise out of reach. One tells his boyfriend he has a friend dying of cancer, then hires a stranger to play the ailing friend at a meal with his partner. Another has become so habituated to lying that he’s forgotten he once told his boyfriend that he was a state champion swimmer. Until, of course, they spot a boy drowning in a lake on Cape Cod, forcing the narrator to confront the murky depths of his self-creation — his lies spreading, Kispert writes, “like invasive weeds.”

In Teddy Wayne’s recent novel “Apartment,” the closet is an apartment, a rent-stabilized two-bedroom that his narrator inherits from a great-aunt. Wayne’s protagonist goes unnamed, and he’s not explicitly queer, but in his intensifying obsession with his roommate, Billy, a brawny and talented classmate whom he invites to live with him rent-free, he bears the imprint of Tom Ripley, who spoke of the “peculiar, delicious atmosphere of purity” he felt playing roles other than himself. Sitting in a sauna with a naked Billy, Wayne’s narrator invokes “The Silence of the Lambs,” wishing he could slip into his roommate’s skin “like an exoskeleton.” But what he perceives as his own inadequacy is actually, of course, desire. And when it’s eventually rebuffed, his self-loathing becomes an engine for the novel’s coup de grâce, an act of treachery that literalizes the notion of the closet as a place perpetually at risk of breach.

Like “Apartment,” James Gregor’s 2019 novel “Going Dutch” involves a graduate student with an aversion to honesty: Richard is openly gay, but when an unassuming classmate, Anne, helps him write his dissertation, eventually taking over the project entirely, he enjoys the plagiaristic convenience of her company too much to tell her he’s attracted to men. As the dueling vectors of his life threaten to collide — one, in which Richard is happily dating a man named Blake, and the other, in which he and Anne seem the perfect picture of upper-crust heterosexual romance — Richard justifies his lies as “a kind of settling of scores with his past,” as though his sexuality were a debt of which he’s owed relief.

In many of these books, the past has hardened the protagonists, rendering them isolated and skeptical of good will. Consider Brandon Taylor’s debut novel, “Real Life,” about Wallace, a black, gay graduate student adrift among his insensitive, all-white cohort of fellow doctoral candidates. “The past is greedy, always swallowing you up, always taking,” Wallace says, remembering the sexual abuse he suffered as a boy, detailed in the novel’s only instance of first-person narration. Wallace does not lie as compulsively or artfully as the fatalists of some other recent gay novels. Instead, Taylor illustrates the psychic burdens of racism, homophobia and abuse with extraordinary nuance, crafting a portrait of a complicated and withholding narrator who regards the sympathy of others as “a kind of ventriloquism” and speaks to his friends with glib ambivalence.

Reading “Cleanness,” Garth Greenwell’s transfixing work of autofiction, one can just about imagine these novels and their characters in conversation with one another, as though shame, and its expression in the form of concealment and dishonesty, are heirlooms of the queer experience. In “Mentor,” the opening story, Greenwell’s unnamed narrator — the same gay, expat English professor in Bulgaria we met in his previous novel, “What Belongs to You” — has coffee with a student, G., at a cafe in Sofia. The student mentions a poem he wrote in class, inspired by Frank O’Hara — the first thing he’s read, he says, “that seemed like it was about me.” On his own poem, G. goes on, his teacher made copious notes about everything except “the most important mistake”: the female pronouns he used instead of male ones. “You’re the only person I know who talks about it, who’s so public and who isn’t ashamed,” G. tells the narrator, an older, wiser and self-possessed man, but one who nevertheless struggles with the echoes of his shame.

The anguished student confides in his teacher, speaking in hushed tones as he reveals his love for a male classmate who’s rebuked him. It’s incumbent on the narrator to impart advice, mentor to student — queer adult to queer adolescent — but he is jolted by the sensation of having his own experiences reflected back at him, the shame he’s tried to expiate still hovering close, like a specter. The student leaves, too enmeshed in his torment to imagine a future beyond it, and the narrator is left to ponder “how much we lose in gaining this truer vision of ourselves.” “How much smaller I have become,” he says; “through an erosion necessary to survival perhaps and perhaps still to be regretted, I’ve worn myself down to a bearable size.”

Greenwell’s narrator is a poet of self-abasement, keenly attuned to the notion of size, of taking up too much space, and its centrality to queer experience. “I want to be nothing,” he repeats in the story “Gospodar,” during a violent and abusive sexual encounter. But at the same time he is intensely self-aware, sensitized to the redemptive properties of love and intimacy, which take form in the sinuous rhythms of his words. This, too, is a cornerstone of queer narratives, which suggest that whatever comfort can be found in concealment is inextricable from self-knowledge. Without it, these character studies would not exist, either as documents to the psychology of the closet or testaments to a future outside it.