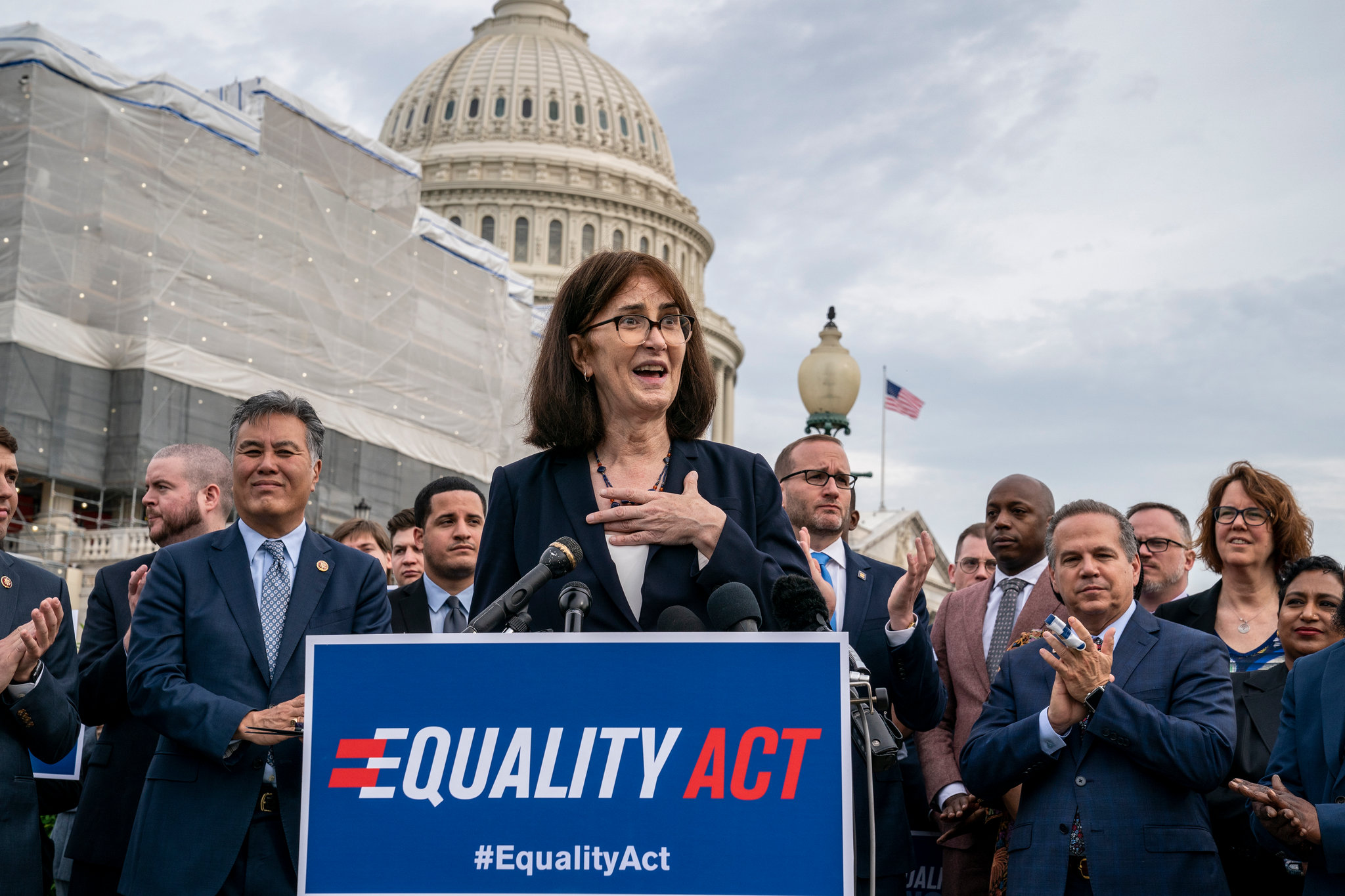 The bill would bar discrimination based on sexual orientation and gender identity.

The Equality Act, sponsored by Rep. David Cicilline (D-R.I.), would prohibit discrimination based on sexual orientation and gender identity in housing, employment, credit, and federally funded programs, among other areas.

Every single House Democrat present voted for the bill, withstanding GOP efforts to put caucus moderates on the record to prohibit LGBTQ discrimination in federally funded education programs, which, some GOP members argued, might affect sports programs. Seven Democrats did not vote.

Rep. Greg Steube (R-Fla.) called for a procedural vote on an amendment stating that nothing in the law “may be construed to diminish” existing protections under Title IX of the Civil Rights Act, which prohibits sex discrimination in education programs that receive federal funding.

The Florida Republican argued that the bill will inhibit competitiveness in women’s sports and women’s eligibility for athletic scholarships.

“A sports team couldn’t treat a transgender woman differently from a woman who is not transgender on the ground that the former is male-bodied,” Steube said on the House floor. “Yet, the reality is [when] putting male and female bodied athletes together in open sport … females lose.”

“This is fear mongering about trans women playing in sports,” California Rep. Katie Hil largued in opposition to the amendment. “No person is trying to game the system to participate in women’s sports. That is a sad scare tactic.” The Republican motion to recommit failed with only one Democrat, Rep. Dan Lipinski, voting in favor of the amendment; seven did not vote. Lipinski was also the only Democrat not to cosponsor the legislation.

Republican opponents also argued the measure would restrict individual religious freedoms and mandate “specific accommodations” in shared facilities that would put burdens on small businesses, schools, and other community places.

“Its vague and circular definition of gender identity will lead only to uncertainty, litigation, and harm to individuals and organizations that will be forced to comply with a law the authors don’t even seem to understand,” Rep. Virginia Foxx (R.-Va.) said on the House floor Friday. “This is a classic example of passing something now and figuring out what it actually means later … If the devil is in the details, we’re in for a lot of devilish surprises.”

In response, Cicilline, the measure’s sponsor, argued that the bill “does not, nor could any legislation,” supersede the First Amendment’s religious freedom protections.

“H.R. 5 allows the standards set by prior civil rights law to not interfere with worship and religious practices by religious organizations,” Cicilline added.

The legislation won’t likely go far in the Republican-controlled Senate. One Senate Democrat, West Virginia Sen. Joe Manchin, said in March that he will not support the Equality Act without changes.

Additionally, President Donald Trump has signaled that he won’t sign it. The Washington Blade reported earlier this week that the Trump administration plans to issue a statement of administrative policy opposing the legislation.

“The Trump administration absolutely opposes discrimination of any kind and supports the equal treatment of all,” a senior administration official told the Blade via email. “However, this bill in its current form is filled with poison pills that threaten to undermine parental and conscience rights.”

According to a 2017 National Public Radio and Harvard T.H. Chan School of Public Health survey, at least one in five LGBTQ Americans reported being discriminated against because of their sexuality or gender identity when applying for jobs, in pay, and when trying to rent or buy housing. Another 26 percent say they were unfairly treated by the courts “because they are part of the LGBTQ community.”

The House vote comes as the Supreme Court takes up the question of whether the 1964 Civil Rights Act’s Title VII prohibition against sex-based employment discrimination extends to sexual orientation and gender identity, and as federal agencies tasked with enforcing the law butt heads over how they interpret the law’s meaning of “sex.”

The Equal Employment Opportunity Commission, the federal agency tasked with enforcing civil rights laws against workplace discrimination, maintains its Obama-era position that “discrimination against an individual because of gender identity, including transgender status, or because of sexual orientation is discrimination because of sex in violation of Title VII.”

But the Trump Justice Department in 2017 argued in court that the federal law against doesn’t protect individuals from being fired because they are gay, lesbian or transgender.

The EEOC’s interpretation may soon change. The Senate recently confirmed Trump’s pick to chair the EEOC, Janet Dhillon, who refused to commit to maintain the EEOC’s current position.

The unemployment rate among transgender people in 2015 — the most recent year for which data is available — was three times higher than the national rate, the National Center for Transgender Equality told lgbtqcommunities.

According to NCTE’s 2015 US Transgender Survey, 30 percent of those respondents who were employed during the previous year “reported being fired, denied a promotion, or experiencing some other form of mistreatment in the workplace related to their gender identity or expression.”

Another 77 percent said they “took steps to avoid mistreatment in the workplace,” including “quitting their job.”