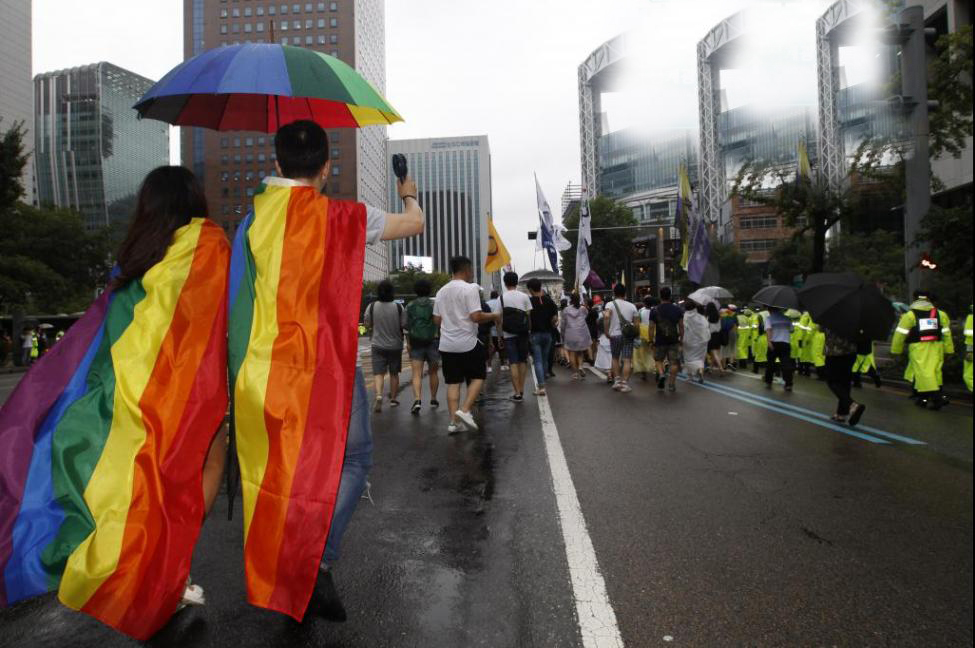 
SEOUL — South Korea is in a race to contain a new corona-virus outbreak in a Seoul party district, prompting a return of social distancing just as the country was easing restrictions. Tracing who was there, however, runs up against the feelings of a gay community that prefers anonymity.

The Asian nation reported more than 30 new infections on Monday for the second day in a row, the biggest daily jumps in a month.

At least 79 cases have been linked to nightclubs and bars that the cluster’s suspected “patient zero” visited the previous weekend, according to South Korea’s Centers for Disease Control and Prevention.

The 29-year-old patient went barhopping across Seoul’s trendy Itaewon neighborhood days before receiving a covid-19 diagnosis Wednesday. His case was the first new local infection in four days, during which only a handful of imported cases were reported.

That same Wednesday, Seoul officials announced an end to previous social distancing restrictions and declared the start of “a new everyday life with the coronavirus,” in an attempt to return to normal.

The sudden increase in cases dealt a blow to the Seoul government’s confidence about reopening its economy. South Korea has won international acclaim for its early success in containing the epidemic with aggressive contact tracing and widespread testing.

South Korean President Moon Jae-in said Sunday that the nation should “brace for the pandemic’s second wave,” warning of a “prolonged” war.

The infection tally from the Itaewon clubs and bars is expected to grow as officials track down thousands of visitors there during the holiday week.

What complicates this search is that many among those clubgoers may not want to be identified because of the stigma attached to the Itaewon establishments catering to lesbian, gay, bisexual, transgender and queer clientele.

South Korea’s contact tracing officers tracked down detailed pre-quarantine movements of the 29-year-old man and published online the nightlife locations he visited. Those places have been identified as gay bars and clubs by South Korean media outlets including Kookmin Ilbo, a major daily newspaper with links to an evangelical church.

“Gay club” and “gay coronavirus” were among the most searched terms on South Korean social media in the days following the outbreak. The Internet was rife with attacks including hate speech and images claiming to show the “filthy goings-on” at gay bars that gave rise to infections.

“These threats make it harder for those who came into contact with a virus carrier to report themselves due to fears of getting outed,” the group said in a statement.

South Korea’s extensive contact tracing regime, which tracks and publishes movements of coronavirus patients, has been credited with effectiveness in virus control, but the system also has raised concerns about privacy infringement.

Seoul Mayor Park Won-soon said in a radio interview Monday that about 3,000 out of more than 5,500 people who visited the Itaewon nightspots during the holiday week either provided false phone numbers or did not answer calls from the officials. For those who could not be reached, Seoul authorities will look into location data from credit card records and security camera footage and will even visit their homes to track them down, Park said.

“We want those related to Itaewon clubs to get tested voluntarily, but if not, we [must use] coercive measures as well,” Park said at a briefing on Monday. He said Seoul will set up “anonymous testing” for those who have privacy concerns.

South Korean Prime Minister Chung Sye-kyun urged the clubgoers to get tested for the novel coronavirus as soon as possible.

“If you hesitate one day, our return to normal life may be paused for a month,” he said Monday in a public meeting. He said that “speed is key” to prevent the virus from spreading in the densely populated capital area.