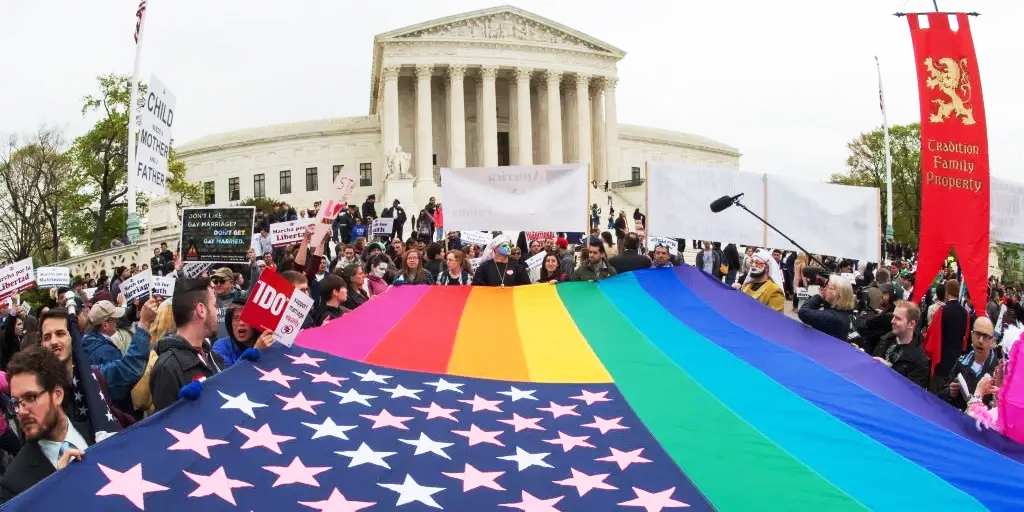 The decision will have a broad impact. More than half the US states don’t cover sexual orientation and gender identity through their own anti-discrimination laws.

A divided U.S. Supreme Court ruled that federal law protects gay and transgender workers from job discrimination in a watershed decision that gives millions of LGBTQ people in dozens of states civil rights they had sought for decades.

The decision will have a broad impact. More than half the U.S. states don’t cover sexual orientation and gender identity through their own anti-discrimination laws. More than half the nation’s 8 million LGBTQ workers live in those states, according to the University of California at Los Angeles School of Law’s Williams Institute.

The dispute tackled a central irony in the fight over LGBTQ Communities rights: Even though the Supreme Court legalized same-sex marriage nationwide in 2015, LGBT people still could have been fired from their jobs in much of the country.

The ruling comes even after the Supreme Court shifted to the right with President Donald Trump’s appointments of Gorsuch and Justice Brett Kavanaugh. The Trump administration urged the court to reject LGBTQ job protections, saying Congress had no intention of covering sexual orientation or gender identity when it enacted the 1964 Civil Rights Act.

Writing for the court, Gorsuch said the legislators who drafted the law “might not have anticipated their work would lead to this particular result.” But he said the language of the law, which bars discrimination on the basis of “sex” but doesn’t explicitly mention sexual orientation or gender identity, was clear.

“The limits of the drafters’ imagination supply no reason to ignore the law’s demands,” Gorsuch wrote. “Only the written word is the law, and all persons are entitled to its benefit.”

Alito said in his dissent that the ruling could have unforeseen consequences, potentially affecting bathroom and locker room access, women’s sports, university housing and hiring by religious groups. He said the majority was acting like a legislature, usurping Congress’s role.

“A more brazen abuse of our authority to interpret statutes is hard to recall,” Alito wrote.

Gorsuch said that “we do not purport to address bathrooms, locker rooms, or anything else of the kind.”

Gorsuch pointed to a federal religious-freedom law that he said “operates as kind of a super statute displacing the normal operation of other federal laws.” That law “might supersede Title VII’s commands in appropriate cases,” he said, referring to the federal civil-rights law’s anti-discrimination provision.

Not Members of Congress

In a separate dissent, Kavanaugh wrote that “we are judges, not members of Congress.”

The ruling may affect legal challenges to a rule the Department of Health and Human Services finalized Friday that removed women seeking abortions and LGBT people from the Affordable Care Act’s non-discrimination protections. The rule allows health-care workers, hospitals, and insurance companies that receive federal funding to refuse to provide or cover any services to those people.

James Esseks, director of the American Civil Liberties Union’s LGBTQ and HIV Project, said in a media conference call that Monday’s decision, while “sweeping and wonderful,” still doesn’t provide all the protections under federal law that LGBTQ people are seeking.

Some federal civil-rights laws don’t contain a ban on sex discrimination, including those protecting access to public accommodations and recipients of federal funding, he said. A bill called the Equality Act, passed by the House but stalled in the Senate, would fill those gaps, Esseks said.

The justices were considering three lawsuits. The two gay-rights cases involved a Georgia county accused of firing a man because he is gay and a now-defunct New York skydiving company that allegedly fired an instructor because of his sexual orientation.

The transgender-rights case concerned a Michigan funeral-home chain that fired Aimee Stephens as she was preparing to start living openly as a woman. Stephens died May 12, as the Supreme Court was deliberating over her case. LGTBQ rights activists contended that sexual-orientation and gender-identity bias are forms of sex discrimination because they hinge on the gender of the person being targeted.