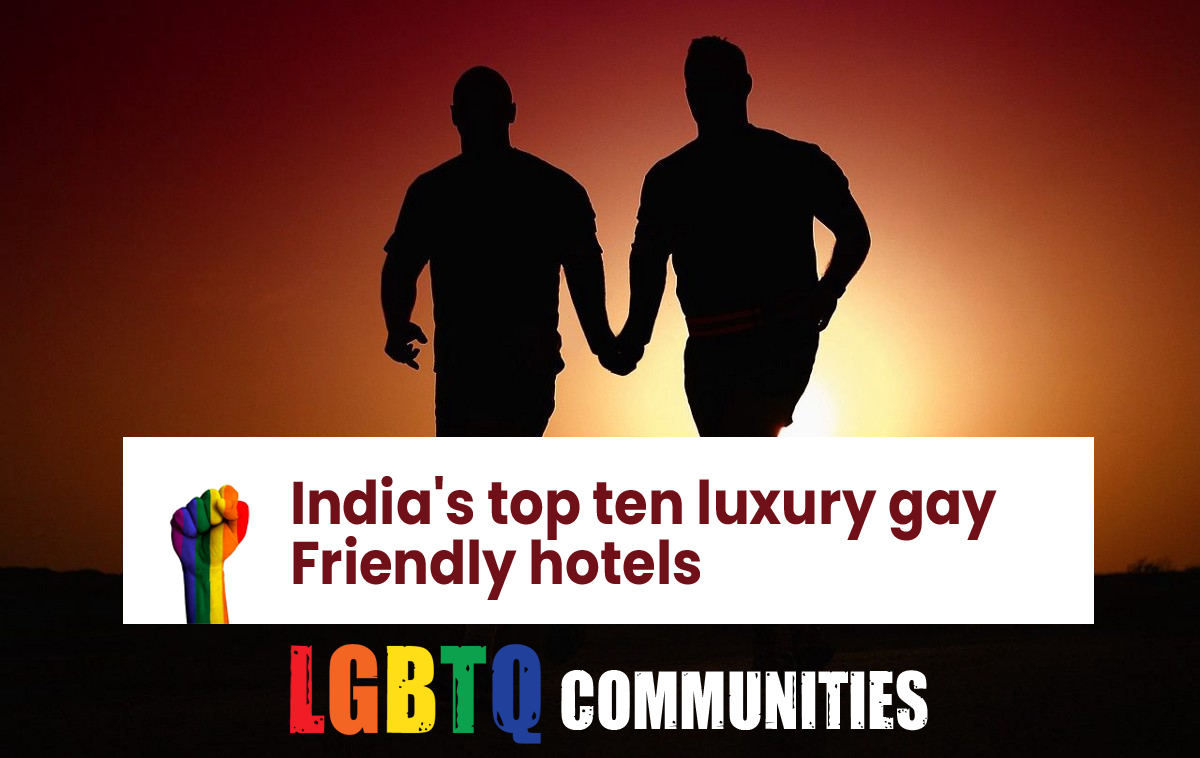 India has been known for its hospitality and these hotels are the real blend of the luxury and hospitality. The selection of the hotels is done specially keeping in view the interest of LGBTQ communities. Based on our customers ranking, we have listed the Gay friendly hotels in India from top to bottom. LGBTQ communities combine all these hotels in our LGBTQ Tour in India to make a beautiful bunch of different fragrances to make your holiday a lifetime memorable.

The Leela Palace New Delhi, a flagship property of The Leela Palaces, Hotels and Resorts, is one of the finest architectural marvels built from ground up in the last thirty years in downtown Delhi. Built in the shape of a butterfly, this visual spectacle is ensconced in the heart of Chanakyapuri, near the prestigious neighborhood of Diplomatic Enclave, blending seamlessly with its majestic surroundings.

Its architecture is inspired by Lutyens, art and embellishment by Mrs. Madhu Nair and its levels of refinement and generosity of space mirror the great palaces of the world. Breathtaking vision superbly realised.

The Oberoi Amarvilas enjoys an unrivalled position, just 600 metres from the iconic Taj Mahal. Each of our rooms affords uninterrupted views of this ancient monument to love, while elements of the layout and design pay homage to its Mughal splendour.

The hotel is approached along a sweeping driveway, verdant with native trees and lit by flaming torches. Just inside, a Mughal style quadrant is ornamented with cascading fountains and framed by an arched passageway and gold leaf frescoes.

By day, guests can travel in our private golf buggies to the Taj Mahal. At night, they can savour a candlelit dinner beside its soft silhouette.

The Oberoi Rajvilas is a royal resort set in a breathtaking thirty two acre oasis of beautiful landscaped gardens, filled with exotic birdlife. Built around an 18th century Shiva temple which affords chanting with a Hindu priest, meditation and morning yoga, The Oberoi Rajvilas is a haven of mystical peace and natural serenity.

Located on the bank of Lake Pichola, The Oberoi, Udaivilas stands on the 200 year old hunting grounds of the Maharana of Mewar. Spread over a luxurious fifty acres, which includes a twenty-acre wildlife sanctuary with deer and wild boar, The Oberoi Udaivilas affords spectacular views across the verdant gardens and sparkling Lake Pichola.

The hotel’s intricate layout of interconnecting domes and corridors reflects the layout of Udaipur itself – whose seven lakes are linked by canals. These domes and walkways are flooded with sunlight, caressed by balmy breezes and offer magnificent views of the lake and gardens.

Accommodations at Taj Lake Palace, are as delightful as the exterior. Every one of our romantic rooms holds a story and among the most compelling is The Chandra Prakash Suite, meaning Lustre of the Moon. The decorative gilt moldings, sculpted marble columns, and fine fretwork screens impressed even the Maharaja who held court in this very room in the 1930s.

There are countless unique experiences to be had. Sail into a purple sunset on a 150-year old Gangaur complete with candlelight and resplendently dressed oarsmen. Indulge in a heritage walk with an escort followed by a glass of sparkling wine at the bar. Soak in the sounds and sights of the city as your royal butler accompanies you on a shopping trip. In this royal dream, anything is possible.

Walk from room to room amongst rich textures, opulent furnishings and exquisite objects dart. Step out into expansive, ornamental gardens arranged in brilliant symmetry. Retire to rooms that were once the sanctuaries of kings, princes and their guests. Rambagh Palace exudes an unmistakable sense of history. Its an architectural masterpiece that transcends time.

Request the legendary Peacock suite, which overlooks the Mughal Terrace and the garden where the Maharaja used to celebrate “Holi,” the festival of color and lights. Stage an evening of high romance in a private tent, illuminated only by torchlight. Indulge in a stately dining at the gilded Suvarna Mahal, formerly the palace ballroom. Enjoy a royal, feast and lounging under a star-speckled sky. Play Polo as the kings played it, or at a more leisurely pace on elephant back. Wind up the days activities in the sophisticated charm of the legendary Polo Bar. Rambagh Palace allows guest to partake of a wealth of experiences that resound with the memories, luxuries and extravagances of a bygone era that luckily, has not entirely disappeared.

The Luxury Hotel of the Year- India by Luxury Travel Guide Global Awards 2015, Chosen by Trip Advisor Hall of Fame for 2015 and is bestowed with the Excellence Award, The Imperial Spa is a FINALIST for World Luxury Spa Awards 2015 Best Luxury Hotel Spa

Chosen as one of the Top city hotels in Asia and ranked as the Best Hotel in Delhi by Travel + Leisure Worlds Best Awards 2014 and listed amongst 15 Legendary Hotels around the world by Fodors Travel in 2014, The Imperial is an iconic property in Delhi’s 5 star hotel category and the most distinguished address situated in the heart of the capital, reminiscent of the halcyon days of the Raj. A luxury hotel with an iconic and awe-inspiring heritage interwoven in colonial elegance, it dwells in its modern delivery of old-style class, magnificence and luxuries aplenty. Built in 1931 by Blomfield, one of Sir Edwin Lutyens associates and inaugurated by Lord Willingdon in 1936, it is New Delhis landmark Hotel, located on Janpath, the erstwhile Queensway. The Hotel is steps away from the renowned shopping district and citys major attractions and just 30-minutes drive from the international airport.

The Palace was built, between 1928 and 1943, for H.H. Maharaja Umaid Singh ji, Grand Father of our present Maharaja, who had benevolently commissioned a new palace in 1923 to replace Mehrangarh Fort as the symbol of a new Jodhpur and to give employment to the people of Marwar during the period’s great droughts and famines.

Perched high above the desert capital of Jodhpur, Umaid Bhawan Palace is the last of the great palaces of India and one of the largest private residences in the world – set amidst 26 acres of lush gardens.

Set on a one hundred acre private estate of indigenous desert scrub, The Serai draws inspiration from the royal caravan sites of Rajputana; blending the dash and vivacity of this Land of Kings. There is no better place from which to venture into the mystical environs of Jaisalmer to discover its fabled golden fortress, a UNESCO World Heritage Site. Evenings are spent under the vast expanse of the desert sky, punctuated by the stars and ancient melodies of Manganiyar folk musicians whose songs have haunted these dunes for centuries.

The SUJÃN connection to Jaisalmer is one of friendship, of personal connections, of a family being drawn to a destination decades ago, that is favoured by many today. Our luxurious desert camp and spa that was established in 2008 is a spectacular getaway. In its first year, The Serai was an early Indian property to become a member of Relais & ChÃ¢teaux. Many of the experiences shared at The Serai would not have been possible without the collaboration of local communities. The ancient folk musicians, who sang for our family when we first came here in 1971, are the same family of musicians who share their music around the campfire today at The Serai.

The Laxmi Niwas Palace was commissioned by His Highness Sir Ganga Singh Ji in 1904. The impetus behind it was two-fold to provide employment to the townspeople and to create a stately residence worthy of the royal house of Bikaner.

His Highness was a man of impeccable taste and supervised the artists, masons and builders personally in their endeavours. Many of the friezes on the palaces walls, the geometrically perfect symmetry of its outlay, the ornate filigree work and latticed screens may all be attributed to his artistic vision and temperament.

Section 377 may have been struck down by the Indian Supreme Court last year, but changing years of set mindsets and stigmas takes time. It is hardly surprising then, that people from the LGBTQ community struggles to find hotels that welcome them with open arms. Well, here we have a list of hotels that not only allow the LGBTQ communities to be their true self on their property, but also go out of their way to make them feel welcome.