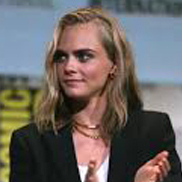 British Model and actress Cara Delevingne hasn’t made an official coming out announcement, but she did make this post on National Coming Out Day in 2014: “I’m late for National Coming Out Day but better late then never. Don’t be scared to be who you are.” She has been in a relationship with Annie clark the musician also known as St. Vincent – since 2015. Shes Happwith her stance.