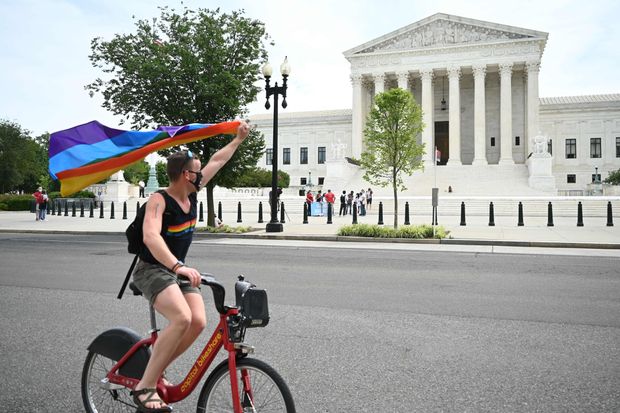 The court said the language of the Civil Rights Act of 1964, which prohibits sex discrimination, applies to discrimination based on sexual orientation & gender identity.

WASHINGTON — The Supreme Court ruled on Monday that a landmark civil rights law protects gay and transgender workers from workplace discrimination, handing the movement for L.G.B.T. equality a long-sought and unexpected victory.

“An employer who fires an individual merely for being gay or transgender defies the law,” Justice Neil M. Gorsuch wrote for the majority in the 6-to-3 ruling.

That opinion and two dissents, spanning 168 pages, touched on a host of flash points in the culture wars involving the LGBTQ communities — bathrooms, locker rooms, sports, pronouns and religious objections to same-sex marriage. The decision, the first major case on transgender rights, came amid widespread demonstrations, some protesting violence aimed at transgender people of color.

Until Monday’s decision, it was legal in more than half of the states to fire workers for being gay, bisexual or transgender. The vastly consequential decision thus extended workplace protections to millions of people across the nation, continuing a series of Supreme Court victories for gay rights even after President Trump transformed the court with his two appointments.

The decision achieved a decades-long goal of gay rights proponents, one they had initially considered much easier to achieve than a constitutional right to same-sex marriage. But even as the Supreme Court established that right in 2015, workplace discrimination remained lawful in most of the country. An employee who married a same-sex partner in the morning could be fired that afternoon for being gay.

Supporters of LGBTQ Communities rights were elated by the ruling, which they said was long overdue.

“This is a simple and profound victory for LGBTQ civil rights,” said Suzanne B. Goldberg, a law professor at Columbia. “Many of us feared that the court was poised to gut sex discrimination protections and allow employers to discriminate based on sexual orientation and gender identity, yet it declined the federal government’s invitation to take that damaging path.”

In remarks to reporters, Mr. Trump said he accepted the ruling. “I’ve read the decision,” he said, “and some people were surprised, but they’ve ruled and we live with their decision.” He added that it was a “very powerful decision, actually.”

The Trump administration had urged the court to rule against gay and transgender workers, and it has barred most transgender people from serving in the military. The Department of Health and Human Services issued a regulation on Friday that undid protections for transgender patients against discrimination by doctors, hospitals and health insurance companies.

Those actions involved different laws from the one at issue on Monday, and the Supreme Court has allowed the military ban to go into effect while lawsuits challenging it proceed. Still, the court’s ruling suggested that a new era in transgender rights has arrived.

The decision, covering two sets of cases, was the court’s first on lesbian, gay, bisexual and transgender rights since the retirement in 2018 of Justice Anthony M. Kennedy, who wrote the majority opinions in all four of the court’s major gay rights decisions. Proponents of those rights had worried that his departure would halt the progress of the movement toward equality.

The Supreme Court is generally not very far out of step with popular opinion, and large majorities of Americans oppose employment discrimination based on sexual orientation, and substantial ones oppose it when based on gender identity. More than 200 major corporations filed a brief supporting the gay and transgender employees in the cases before the court.

Instead, the question for the justices was the meaning of a statute, Title VII of the Civil Rights Act of 1964, which bars employment discrimination based on race, religion, national origin and sex. They had to decide whether that last prohibition — discrimination “because of sex” — applies to many millions of gay and transgender workers.