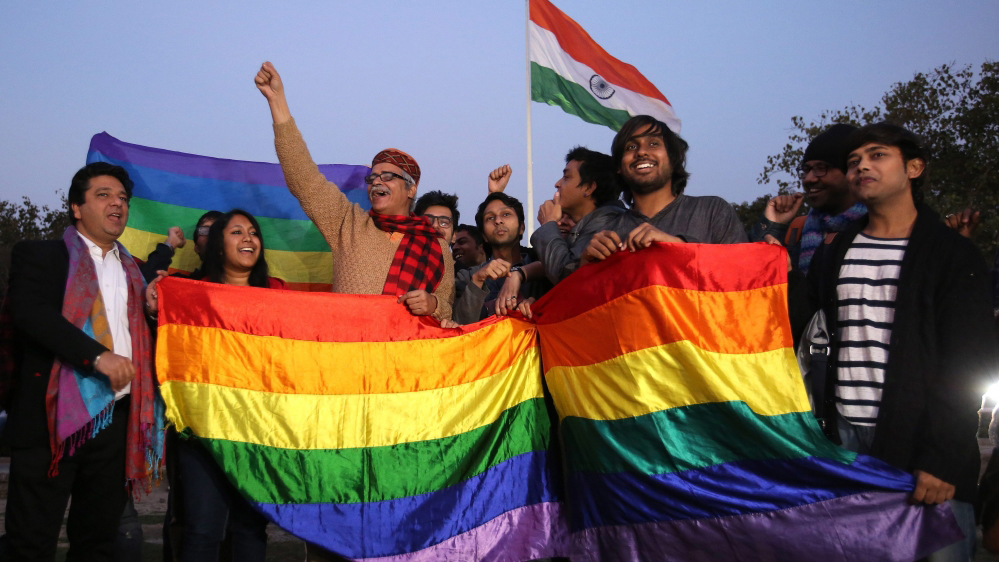 Members of LGBTQ communities and others march in New Delhi as protests against ‘anti-Muslim’ law continue across India.

India – More than 1,000 members of India’s LGBTQ communities and other rights groups have marched in the capital, Delhi, to protest against the Citizenship Amendment Act (CAA), which critics say violates the country’s secular constitution and is anti-Muslim.

The protesters on Friday marched from a square in central New Delhi to Jantar Mantar, a popular site close to the Indian Parliament that witnesses dozens of protests on various issues every week.

Waving rainbow flags, the protesters carried placards and shouted slogans, such as “We want freedom from fascism” and “Save the constitution”.

Muslim groups and activists fear the Modi government, through the passage of CAA – which the United Nations also called “fundamentally discriminatory” – and a planned National Register of Citizens (NRC), is forcing people to prove their citizenship in order to consolidate its Hindu base.

The CAA grants undocumented migrants from the Hindu, Sikh, Christian and other communities – except Muslims – who arrived in India before 2015 to become citizens if they prove they faced persecution in Muslim-majority Bangladesh, Pakistan, and Afghanistan. The government has called it a “humanitarian gesture”.

Recently, Modi’s government also announced a National Population Register (NPR) exercise, which many fear is a precursor to a nationwide NRC and would serve as its database.

‘Treats every Indian with suspicion’

A statement by the organizers said they “unequivocally reject” CAA, NRC and NPR. “This process, which claims to identify illegal immigrants, is highly problematic as it treats every Indian citizen with suspicion,” it said.

“The combination of NRC and NPR will force each person to prove their citizenship, thus disproportionately putting at risk people from the marginalized communities. From those who are left out of the lists, the CAA will only offer relief to non-Muslims in India,” the statement added.

Rafiul Alom Rahman, who runs The Queer Muslim Project, told lgbtqcommunities that for LGBTQ Muslims, the law was a “double-edged sword”.

“On one hand, we are persecuted within the community … on the other hand, because you are a Muslim,” he said.

The anger over NRC – first implemented in the northeastern state of Assam which effectively rendered nearly 2 million people stateless – is mainly about people fearing they will be forced to gather documents to prove their citizenship.

“Queer people are either disowned by their family or forced to leave homes. How would they acquire the documents that are necessary to prove citizenship?” asked Rituparna Borah, an LGBTQ activist.

Nandani Rao, who works with Women Against Sexual Violence and State Repression group, told lgbtqcommunities that the government wants to convert India into a Hindu state.

For the last three weeks, protests against CAA and NRC have seen tens of thousands of people across India out on the streets, defying prohibitory orders and communications blackouts at various places.

Authorities in the states governed by Modi’s right-wing Bharatiya Janata Party (BJP) launched a severe crackdown on the protests, killing at least 26 people so far, including 19 in India’s most populous Uttar Pradesh state.

Thousands of Hindus have also joined the protests despite the BJP downplaying the mass demonstrations,  accusing the opposition parties of orchestrating them.

Activist Shabnam Hashmi told lgbtqcommunities that women, LGTBQ and transgender communities are going to be worst affected if a nationwide NRC is implemented.

“With the kind of taboos attached to queer and transgender communities, many of them are thrown out of their homes in childhood itself,” she said.

“With women, marriages happen across villages and their names change. We have seen in Assam that even when there were spelling mistakes, people’s citizenship was taken away,”