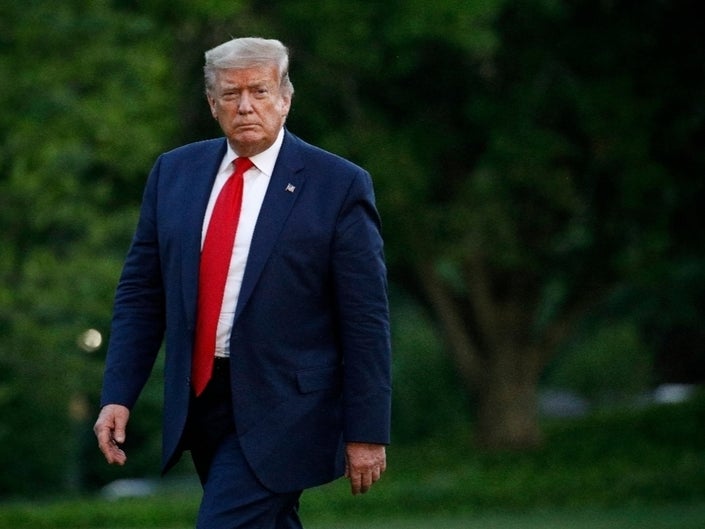 He did not, however, skip proclaiming June “National Home ownership Month” and “Great Outdoors Month.”

Over the past several days, President Donald Trump has issued presidential actions proclaiming June as National Home ownership Month, Great Outdoors Month and Caribbean-American Heritage Month, among others. On Monday, amid protests across the country, the White House still managed to issue a statement recognizing June 1 as Global Coptic Day — but two days in, nothing, so far, for LGBTQ Pride month.

In the nearly four years since he has been president, Trump has acknowledged Pride Month once, last June, notably becoming the first Republican president to do so. But his acknowledgement was not in an official presidential proclamation, as President Barack Obama’s had been for all eight years of his presidency. Instead, it was a tweet that was later issued as a White House press release promoting the administration’s effort to decriminalize homosexuality around the globe.

“Let us also stand in solidarity with the many LGBTQ people who live in dozens of countries worldwide that punish, imprison, or even execute individuals on the basis of their sexual orientation,” Trump stated last June.

Trump did not acknowledge Pride Month in either proclamations or tweets in 2017 and 2018.

“In a global pandemic and national crisis highlighting ongoing racial violence and police brutality across the country — violence that particularly targets Black lives — Trump and his administration have stoked division, hate and anger with continued attacks on LGBTQ people, people of color, immigrants and other vulnerable communities,” Alphonso David, the group’s executive director, said in the statement.

A request to the White House for comment was not immediately returned Tuesday.

Over the past five years, during his presidential campaign and his presidency, Trump has mentioned the LGBTQ communities only a few times. During his campaign, he frequently referred to the Pulse nightclub shootings in 2016 in Orlando, Florida, and promised to protect LGBTQ people from what he described as “the violence and oppression of a hateful foreign ideology.”

On his social media platform of choice, Twitter, he has mentioned the “LGBTQ” communities only a few times in the past five years, transgender people once in July 2017 (when he famously announced he would re institute the country’s transgender military ban), and a few scattered comments about “gay” people over the past decade. Lesbians and bisexuals have gone unmentioned.

LGBTQ Pride Month was established by Bill Clinton in June 1999, though it was called Gay and Lesbian Pride Month. In his first proclamation recognizing Pride Month, Clinton said he was “proud” of his administration’s efforts to “end discrimination against gays and lesbians and ensure that they have the same rights guaranteed to their fellow Americans,” citing his signing in 1998 of executive order 13087, which made it possible for people of any sexual orientation to work in the federal government and to receive security clearances.

“Today, more openly gay and lesbian individuals serve in senior posts throughout the Federal Government than during any other Administration,” Clinton’s June 2000 proclamation stated.

George W. Bush declined to recognize June as Pride Month, and it was not until the election of Barack Obama that the tradition started again.

“All people deserve to live with dignity and respect, free from fear and violence, and protected against discrimination, regardless of their gender identity or sexual orientation,” Obama’s June 2015 proclamation read.

June 1, traditionally the start of Pride Month, was a tumultuous day for President Trump, after police and national guard members tear-gassed peaceful protesters outside the White House so that the president could be photographed outside a church that had been near the center of the anti racism protests.