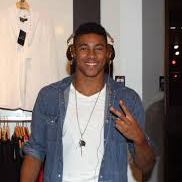 Keiynan Lonsdale (DOB December 19, 1991) is an Australian actor, dancer, and singer&songwriter. He is known for roles such as Oliver Lloyd on the ABC series Dance Academy (2012-13) and Wally West / Kid Flash on The CW series. When he was a MTV VJ, he released original music recordings. He came out gay in 2017 and announced it publically.