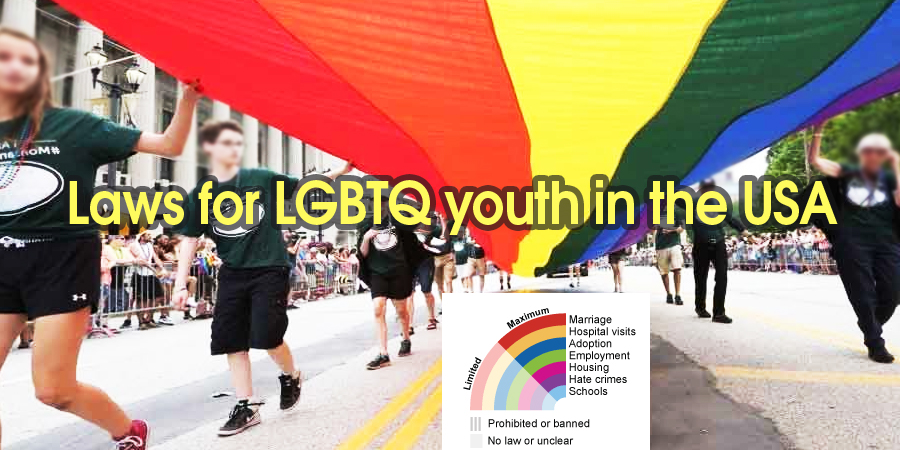 The youth are our tomorrow and it’s our bounden duty to give them a congenial and inclusive environment to grow in. In today’s world that means not being discriminated against for sexual orientation and gender identity / expression. The US Constitution provides equal rights to all its citizens.

What it translates into is that the state mandates as per its federal constitution, that the students in public schools cannot be accorded discriminatory treatment because the authorities disapprove of their sexual orientation or gender identity / expression. The school authorities clearly cannot take bullying / harassment any less seriously if it is targeted towards 🌈 LGBT / perceived LGBT youth.  The same logic holds if the discrimination is because of ones’ association with LGBTQ people.

There’s a US Federal Law – Title IX – that bans discrimination based on ones’ gender. The US Courts decree that discrimination prohibited by Title IX is inclusive of even the people who do not conform to the gender stereotypes in the society.

Some US states require by law that the schools have anti-harassment / bullying policies that clearly mention sexual orientation and gender identity / expression, and chart out consequences for violators. More states are set to follow suit. They also mandate that the students are educated on these policies. Even if their policies do not clearly mention sexual orientation and gender identity/expression, the anti-discrimination laws in the schools are pretty stringent. Students have the right to express themselves even on messages relating to the 🌈 LGBTQ communities in US.

Another issue of concern for the LGBT community of USA is the Conversion Therapy for minors. The practice was criticized by the APA that said such a practice could cause significant harm to a person. Thus far, many states have joined the District of Columbia in banning the Conversion Therapy for minors, as reports the Human Rights Campaign, the leading LGBT rights group in the US. Legislation on the same is expected in some more states. This therapy subjects the 🌈 LGBT people to many ‘treatments and sometimes shock’ to convert them into being heterosexual.

A study by the Williams Institute at UCLA School of Law found that 700,000 LGBT US adults have undergone Conversion Therapy at some point. The issue to ban the therapy for kids and youth has found a common voice.

The LGBT USA community is striving to win many battles for 🌈 LGBTQ Rights to make the society more inclusive.