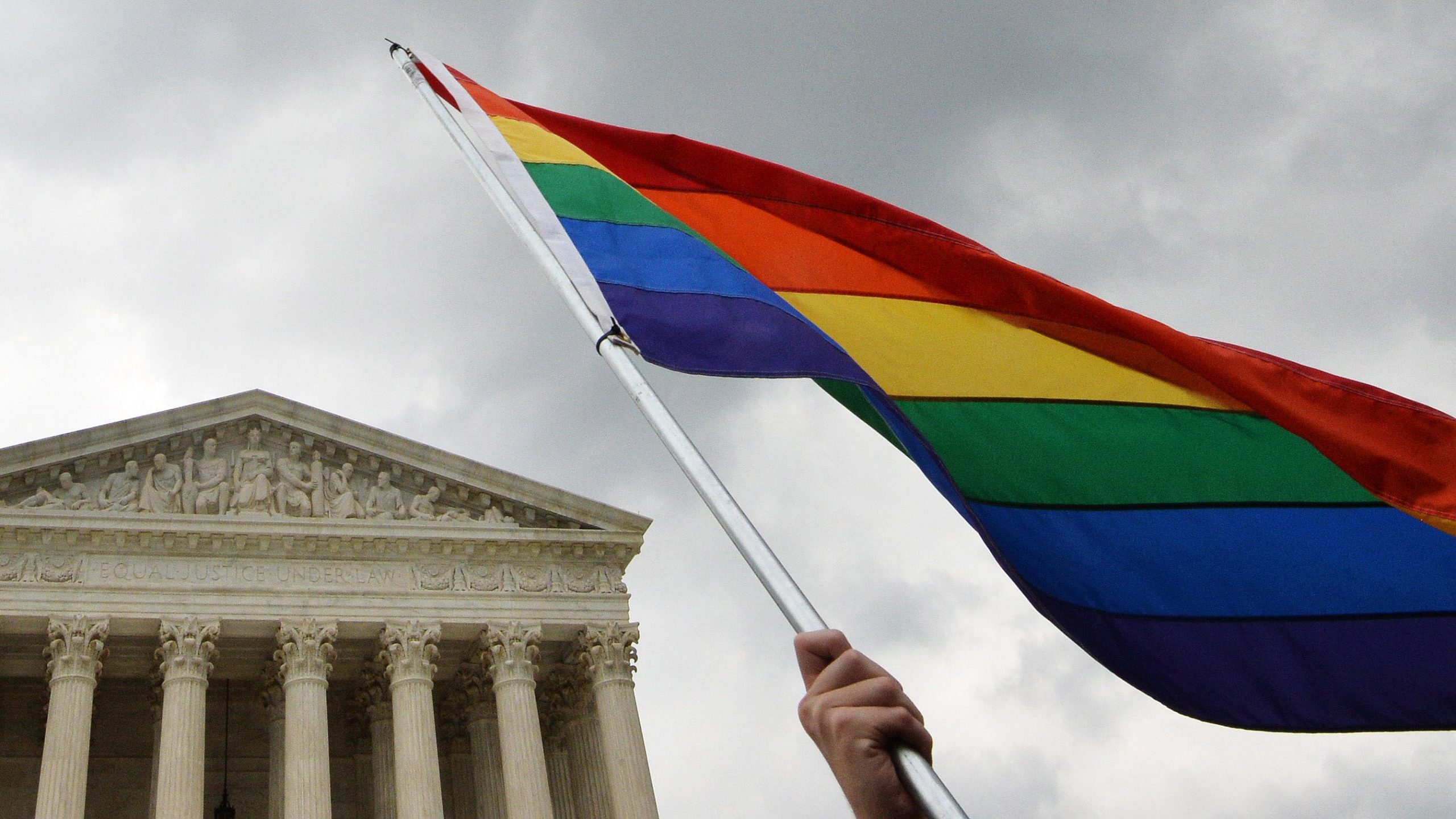 LGBTQ rights advocates triumphed at the Supreme Court Monday, winning a sweeping decision from the justices that protects gay, lesbian and transgender employees from being disciplined, fired or turned down for a job based on their sexual orientation.

Two of the court’s Republican appointees, Neil Gorsuch and John Roberts, joined the court’s Democratic appointees to deliver the surprising 6-3 victory to those arguing for anti-discrimination protections

Writing for the court’s majority, the conservative Gorsuch embraced arguments that seemed radical to many liberals just a few years ago: that the 1964 Civil Rights Act’s prohibition on sex discrimination in employment also effectively banned bias based on sexual orientation or gender identity, even though few if any members of Congress thought they were doing that at the time.

The decision was a rout for social conservatives and a defeat for President Donald Trump’s administration, which had urged the justices to take a narrow view of the half-century-old law.

Some Trump allies immediately denounced Gorsuch’s opinion as a betrayal from the Trump appointee. A top Trump aide quickly criticized the ruling, but when the president himself was asked about it he offered a mild response and passed up a chance to try to make political hay out of the court’s decree.

“I’ve read the decision,” the president said of the various opinions, which ran to 119 pages in all. “Some people were surprised, but they’ve ruled and we live with their decision. That’s what it’s all about. We live with the decision of the Supreme Court. Very powerful, very powerful decision, actually.”

While the cases ruled on Monday garnered less attention than the showdown five years ago that led to the court’s landmark decision finding a constitutional right to same-sex marriage, the latest ruling could be even more impact ful, providing millions of LGBTQ Americans with new workplace rights and ushering in similar legal guarantees of equal treatment in private businesses, schools and elsewhere.

Yet, the high court’s edict also seemed far less earth shaking than the 2015 ruling, perhaps due to ongoing racial unrest and perhaps because polls show an increasingly broad consensus in support of LGBTQ rights.

Explaining the ruling, Gorsuch said Congress may not have intended to ban discrimination against gays, lesbians and transgender individuals, but that the logic of their protection by the statute was inescapable.

“Those who adopted the Civil Rights Act might not have anticipated their work would lead to this particular result. Likely, they weren’t thinking about many of the Act’s consequences that have become apparent over the years, including its prohibition against discrimination on the basis of motherhood or its ban on the sexual harassment of male employees,” Gorsuch wrote.

“But the limits of the drafters’ imagination supply no reason to ignore the law’s demands,” he continued. “When the express terms of a statute give us one answer and extratextual considerations suggest another, it’s no contest. Only the written word is the law, and all persons are entitled to its benefit.”

LGBTQ activists were thought to face an uphill battle at the high court because Congress has spent more than four decades considering, but failing to pass, measures intended to expand the coverage of the 1964 law by explicitly adding sexual orientation to the list of protected traits.

That Gorsuch wrote the majority opinion was viewed as a major coup by gay rights advocates. They hoped his professed devotion to “textualism” — an often literal approach to reading Congressional enactments — would persuade him to embrace a view that LGBTQ discrimination is sex discrimination because it involves treating someone differently at least in part due to gender.

Gorsuch did just that, sounding unequivocal in his conclusions about the half-century-old workplace discrimination ban, known as Title VII.

“An employer who fires an individual for being homosexual or transgender fires that person for traits or actions it would not have questioned in members of a different sex. Sex plays a necessary and undisguisable role in the decision, exactly what Title VII forbids,” wrote Gorsuch, an appointee of President Donald Trump.

Gorsuch also took a jaundiced eye to suggestions that the court should try to divine why Congress never passed language explicitly adding LGBTQ protections to the workplace discrimination law.

“Speculation about why a later Congress declined to adopt new legislation offers a ‘particularly dangerous’ basis on which to rest an interpretation of an existing law a different and earlier Congress did adopt,” he wrote, quoting a prior case.

“We’ve had the Civil Rights Act for 56 years. Everybody has understood what it meant,” she said on Fox News Monday. “It’s very important though to stick to a statute or a law as it is written….If people want to change the law they should go to the Congress. Our Congress doesn’t seem to like to work as hard as the other two branches.”

Some activists who supported Gorsuch as Trump’s first Supreme Court nominee were even more vocal, fuming about his betrayal and arguing he’d cast aside the legacy of the late Justice Antonin Scalia, whose vacancy Republicans held open through 2016 so it could be filled by a Trump nominee.

“Justice Scalia would be disappointed that his successor has bungled textualism so badly today, for the sake of appealing to college campuses and editorial boards,” Carrie Severino of the Judicial Crisis Network said on Twitter. “This was not judging, this was legislating—a brute force attack on our constitutional system.”

Roberts’ vote to back LGBTQ rights in the new ruling was also notable, since he joined the rest of the court’s conservatives in 2015 in vocal dissent from the same-sex marriage decision.

Because the decision Monday is a matter of statutory interpretation, it is not an all-out guarantee of workplace protections for LGBTQ people in the future, since Congress is free to tinker with the law. But as a practical political matter, it seems highly unlikely Congress would reach a consensus to repeal those rights anytime soon.

Justices Clarence Thomas, Samuel Alito and Brett Kavanaugh dissented from the new ruling, arguing that Gorsuch’s claimed humility about simply interpreting the law’s language was belied by the huge gulf between what lawmakers intended and what the court held.

Alito leveled one of the gravest insults one conservative can train on another as he accused his colleague of legislating from the bench.

“There is only one word for what the Court has done today: legislation,” Alito, wrote in a fiery dissent joined only by Thomas. “The document that the Court releases is in the form of a judicial opinion interpreting a statute, but that is deceptive…A more brazen abuse of our authority to interpret statutes is hard to recall. The Court tries to convince readers that it is merely enforcing the terms of the statute, but that is preposterous.”

Alito also insisted that textualism doesn’t mean reading a statute so literally that the purpose of the authors is ignored.

“It calls for an examination of the social context in which a statute was enacted because this may have an important bearing on what its words were understood to mean at the time of enactment,” he wrote. “Textualists do not read statutes as if they were messages picked up by a powerful radio telescope from a distant and utterly unknown civilization.”

Kavanaugh’s solo dissent was more restrained in its tone. He said courts must give force to the “ordinary” meaning of the laws Congress passes, not a “literal” one.

“Both the rule of law and democratic accountability badly suffer when a court adopts a hidden or obscure interpretation of the law, and not its ordinary meaning,” the court’s newest justice wrote.

Kavanaugh said the majority was making “a mistake of history and sociology” because even a rudimentary look at the motivating forces behind the 1964 law shows that it wasn’t seeking to advance gay rights.

“Seneca Falls was not Stonewall. The women’s rights movement was not (and is not) the gay rights movement, although many people obviously support or participate in both,” he wrote.

The Trump stance was a reversal of positions taken during the Obama administration, when the Equal Employment Opportunity Commission held that both anti-gay and anti-transgender discrimination violated existing law, although courts divided on those issues.

Social conservatives who argued against finding protections for LGBTQ Americans in the existing statute sounded dejected Monday about the court’s ruling and warned that it will have unexpected effects.

“Redefining ‘sex’ to mean ‘gender identity’ will create chaos and enormous unfairness for women and girls in athletics, women’s shelters, and many other contexts. Civil rights laws that use the word ‘sex’ were put in place to protect equal opportunities for women,” said John Bursch of the Alliance Defending Freedom.

By contrast, LGBTQ activists were ecstatic about the high court’s decision.

Backers of the new decision said it could spell doom for some Trump administration policies, particularly an effort to roll back protections for transgender individuals seeking health care.

Prior to Monday’s ruling, court decisions or enforcement authorities in nearly half of U.S. states interpreted state law to prohibit workplace discrimination on the basis of sexual orientation or gender identity. In the remaining states, LGBTQ workers had no legal protection against being fired, demoted or paid less on account of those traits.

LGBTQ individuals in many states still have no legal protection against other forms of discrimination, such as in housing or public accommodations, although the new decision could bolster efforts to win such protection in the courts or in Congress.

“In many aspects of the public square, LGBTQ people still lack non-discrimination protections, which is why it is crucial that Congress pass the Equality Act to address the significant gaps in federal civil rights laws and improve protections for everyone,” David said.

The gay and transgender rights cases decided Monday have been lingering on the court’s docket for more than seven months. They were argued last October, on the second day of the court’s current term.